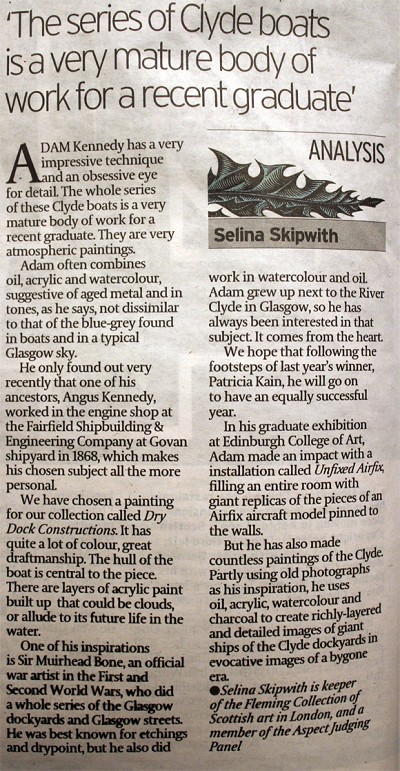 Adam Kennedy has a very impressive technique and an obsessive eye for detail. The whole series of these Clyde boats is a very mature body of work for a recent graduate. They are very atmospheric paintings.

Adam often combines oil, acrylic and watercolour, suggestive of aged metal and in tones, as he says, not dissimilar to that of the blue-grey found in boats and in a typical Glasgow sky.

He only found out very recently that one of his ancestors, Angus Kennedy, worked in the engine shop at the Fairfield Shipbuilding & Engineering Company at Govan shipyard in 1868, which makes his chosen subject all the more personal.

We have chosen a painting for our collection called Dry Dock Constructions. It has quite a lot of colour, great draftmanship. The hull of the boat is central to the piece. There are layers of acrylic paint built up that could be clouds, or allude to its future life in the water.

One of his inspirations is Sir Muirhead Bone, an official war artist in the First and Second World Wars, who did a whole series of the Glasgow dockyards and Glasgow streets. He was best known for etchings and drypoint, but he also did work in watercolour and oil. Adam grew up next to the River Clyde in Glasgow, so he has always been interested in that subject. It comes from the heart.

We hope that following the footsteps of last year's winner, Patricia Kain, he will go on to have an equally successful year.

In his graduate exhibition at Edinburgh College of Art, Adam made an impact with a installation called Unfixed Airfix, filling an entire room with giant replicas of the pieces of an Airfix aircraft model pinned to the walls.

But he has also made countless paintings of the Clyde. Partly using old photographs as his inspiration, he uses oil, acrylic, watercolour and charcoal to create richly-layered and detailed images of giant ships of the Clyde dockyards in evocative images of a bygone era.

• Selina Skipwith is keeper of the Fleming Collection of Scottish art in London, and a member of the Aspect Judging Panel
Next
Previous