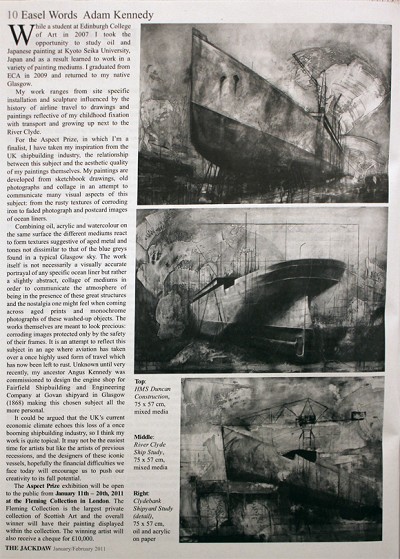 While a student at Edinburgh College of Art in 2007 I took the opportunity to study oil and Japanese painting at Kyoto Seika University, Japan and as a result learned to work in a variety of painting mediums. I graduated from ECA in 2009 and returned to my native Glasgow.

My work ranges from site specific installation and sculpture influenced by the history of airline travel to drawings and paintings reflective of my childhood fixation with transport and growing up next to the River Clyde.

For the Aspect Prize, in which I'm a finalist, I have taken my inspiration from the UK shipbuilding industry, the relationship between this subject and the aesthetic quality of my paintings themselves. My paintings are developed from sketchbook drawings, old photographs and collage in an attempt to communicate many visual aspects of this subject: from the rusty textures of corroding iron to faded photograph and postcard images of ocean liners.

Combining oil, acrylic and water colour on the same surface the different mediums react to form textures suggestive of aged metal and tones not dissimilar to that of the blue greys found in a typical Glasgow sky. The work itself is not necessarily a visually accurate portrayal of any specific ocean liner but rather a slightly abstract, collage of mediums in order to communicate the atmosphere of being in the presence of these great structures and the nostalgia one might feel when coming across aged prints and monochrome photographs of these washed up objects. The works themselves are meant to look precious: corroding images protected only by the safety of their frames. It is an attempt to reflect this subject in an age where aviation has taken over a once highly used form of travel which has now been left to rust. Unknown until very recently, my ancestor Angus Kennedy was commissioned to design the engine shop for Fairfield Shipbuilding and Engineering Company at Govan shipyard in Glasgow (1868) making this chosen subject all the more personal.

It could be argued that the UK's current economic climate echoes this loss of a once booming shipbuilding industry, so I think my work is quite topical. It may not be the easiest time for artists but like the artists of previous recessions, and the designers of these iconic vessels, hopefully the financial difficulties we face today will encourage us to push our creativity to its full potential.