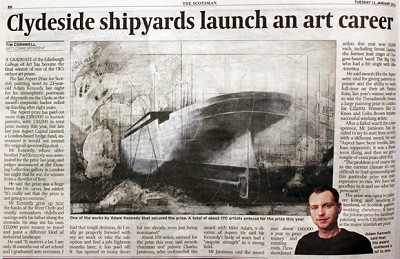 Arts Correspondent
A GRADUATE of the Edinburgh College of Art has become the final winner of one of the UK's richest art prizes.
• One of the works by Adam Kennedy that secured the prize. A total of about 170 artists entered for the prize this year

The last Aspect Prize for Scottish painting went to 23-year-old Adam Kennedy last night for his atmospheric portrayals of shipyards on the Clyde, as the award's corporate backer rolled up funding after eight years.

The Aspect prize has paid out more than £300,000 to Scottish painters, with £30,000 in total prize money this year, but late last year Aspect Capital Limited, a London-based hedge fund, announced it would not extend the original sponsorship deal.

Mr Kennedy, whose older brother Paul Kennedy was nominated for the prize last year, said judges announced at the Fleming Collection gallery in London last night that he was the winner from a shortlist of four.

He said the prize was a huge boost for his career, but added: "It's really sad that the prize is not going to continue."

Mr Kennedy grew up near the banks of the River Clyde and vividly remembers childhood outings with his father along the riverside. He may use his own £15,000 prize money to travel and paint a different kind of industrial landscape.

He said: "It matters a lot. I am only 18 months out of art school and I graduated into recession. I had that tough decision, do I really go properly forward with my art work or take the safe option and find a job. Eighteen months later, it has paid off. It has opened so many doors for me already, even just being nominated."

About 170 artists entered for the prize this year, said awards chairman and painter Charles Jamieson, who co-founded the award with Mike Adam, a director of Aspect. He said Mr Kennedy's body of work had a "singular strength" in a strong field.

Mr Jamieson said the award cost about £60,000 a year in prize money and running costs. Three shortlisted artists this year won £5,000 each, including Steven Lindsay, the former lead singer of Glasgow-based band The Big Dish, who had a hit single with Miss America.

He said awards like the Aspect were vital for giving painters exposure and the ability to work full-time on their art. Patricia Kain, last year's winner, went on to win the Threadneedle Award, a large painting prize in London, for £25,000. Winners like Liz Knox and Colin Brown became successful working artists.

After a failed search for a new sponsor, Mr Jamieson has decided to try to start from scratch with a different award. He said: "Aspect have been terrific, fabulous supporters. It was a fixed- term thing, and then we got a couple of extra years after that.

"The problem is of course that in the current climate it's very difficult to find sponsorship and this particular prize was quite expensive to run. We have said goodbye to it and see what happens next."

The prize was open to painters living and working in Scotland, or Scottish painters working elsewhere. It leaves the Jolomo prize for landscape painting, worth £35,000 in total, as the major Scottish art prize.his via the "Sections" part of the admin system.
Next
Previous