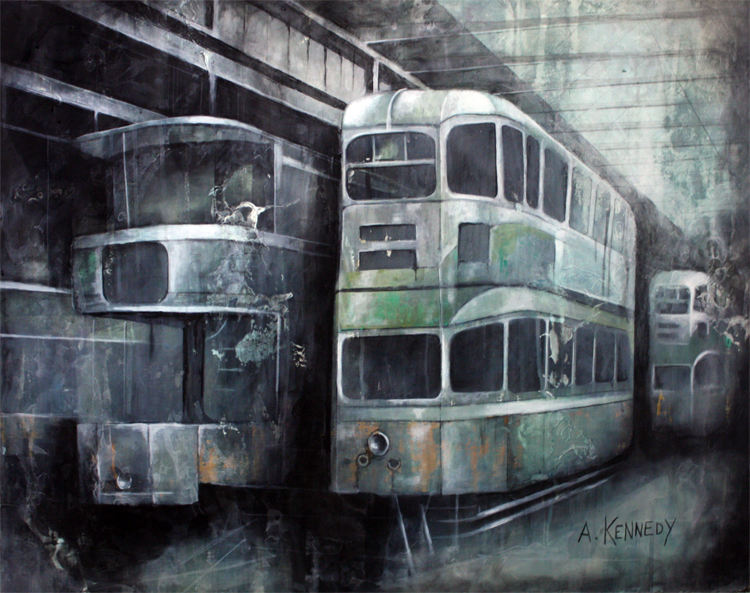 Alistair Ogilvy look's at the work of Adam Kennedy

Adam Kennedy’s work is visually striking, he is a master of depth and field his art eludes a very particular atmosphere and presence. Much of his work is based around the nautical and architectural themes drawing inspiration from the once was illustrious ship building and industrial industries of his Glasgow home and his childhood love of transport, which I can relate to being in awe of the old Glasgow transport museum with its model ships and certain smell!

Adam’s ship images are almost ghostly, nostalgic, breathing life into ships that once were seen towering from the river clyde. The architectural feel they give off, makes one think of a drawing drafted up for a blue-print for the white star line, although along-side the detail is a real sense of movement, scale, realism and artistry.

Adam explains he works from a collage of gathered images although one can tell that his visions come from a place deep within him. The grey’s and black’s he uses portray a rusty, metallic almost dream-like world of elegance and majesty. Adam explains that “Colour would be too much… the medium reflects the subject”

When starting his paintings Adam covers paper with black watercolour paint and using the different mediums, over-lapping and washing off the images start to react and appear out of the darkness. I love that the marks left from the washing away process are kept within the art and adds to the affect using a mixture of acrylic, oil and watercolour. The abstract lines feature alongside his vast infinite ships which helps give off the building process but could also mean something else. Most of his ships are in the building process, still in the depot. Interesting concept. Being tied down to history. “A painting can take 2 hours or 2 years”

After graduating from the Edinburgh college of art, Adam won the aspect prize which helped his career gain standing and recognition although I get the impression he’s surpassed that and wants to be known as an individual artist.

“…The clouds in Glasgow are so heavy and wet..” he wouldn’t paint them the way they are, he’s a non-photo-realist, he would use a stroke of the brush to portray them . The Glasgow atmosphere is a feeling, only folk with a connection to Glasgow can understand it. Adam seems to have captured part of the darkness in a really beautiful way. Bittersweet…. One of his paintings is called shell of old Glasgow. Which says a lot.

Adam is one of a kind in his field, his importance to Glasgow is unquestionable and has successfully forged a path pursuing his passion. Watch out for many exciting projects, one of which are his plans to paint the V and A museum in Dundee after the success he has had with his paintings of the riverside museum.
Next
Previous