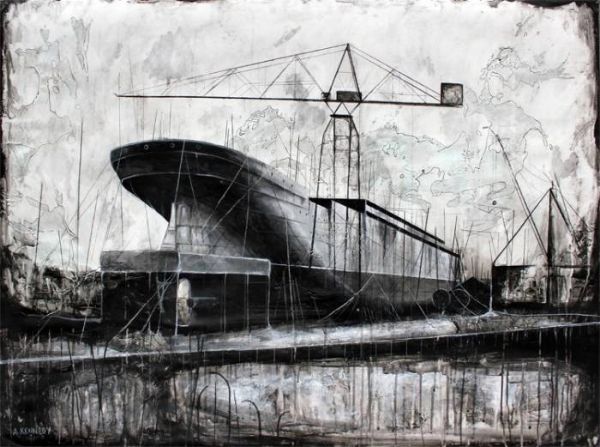 A 2009 graduate of the Intermedia course at Edinburgh College of Art, Adam Kennedy has successfully launched himself into the Scottish art scene. His mixed media paintings of the glory days of shipbuilding on the Clyde have impressed judges at the Aspect prize. Open to anyone who is Scottish or is living in Scotland, the prize is one of the most prestigious north of the border, with winners taking home £30,000. Recipients of the prize also have their paintings included in one of the finest collections of Scottish art outside of Scotland, the London-based Fleming Collection.

Adam's winning paintings are of hulking ships looming into the foreground. They are full of expressive mark making and interesting surfaces, and show an approach to drawing that is almost architectural. "There's a lot of different techniques in them," says Adam. "Initially the surfaces start off black and then the paint's washed away. It's something I experimented with years ago and have recently been developing. Then I spread on oils and acrylics, which react with each other on the paper, and once they're dry, washes are put on top and the paint catches between those marks. There's quite a lot of draughtsmanship goes into it."

He captures the bleakness of the dreich Clydeside shipyards perfectly. "If you look at the clouds in Glasgow, they're always really heavy," he says. "But it's hard to paint that, unless you spend ages doing a big tonal oil painting of clouds. Why not just put a slab of paint on? It can hold the same energy as one of those heavy, wet clouds."

Last year, Adam's brother Paul was also nominated for the Aspect prize, which encouraged Adam to enter this year. "Winning the prize is a bit surreal," explains Adam. "I never thought that one year on I'd be a winner myself. I heard that it might not be lasting much longer, which is why I applied for it."

Unfortunately, it seems that the rumours are true. Since Adam won the prize, the London hedge fund sponsors, Aspect Capital Limited, have announced that it won't be extending the original sponsorship deal.

"It's really sad that it's not going to continue," Adam says. "I think that, especially now, there's so much talent out there that should be recognised. It's such a big platform for artists to get noticed."

Cash prizes are important to artists, especially at the moment, with arts organisations concerned about funding cuts. So naturally Adam has been making plans for how he's going to use the cash. "I'm hoping to go to Arizona to see the aircraft graveyards. I think the work I make next will be quite similar to the work I've been doing for the Aspect prize but the difference is that the aircraft actually still exist whereas the ships were all researched from old photographs. My new work will be a lot more developed and I really want to get a solo show together at some point, but I'm not going to rush into it as I don't want to compromise the quality of the work."

As well as a possible solo show, Adam and his brother Paul plan to exhibit their work together in the summer. "People appreciate that we have our own styles and it's nice to be recognised as equals within the art scene. When it comes to our work we're both very encouraging. I think we both want to see each other do well, so there's never any false praise."

With two such talented young artists, the exhibition will certainly be one for the diary.
Next
Previous